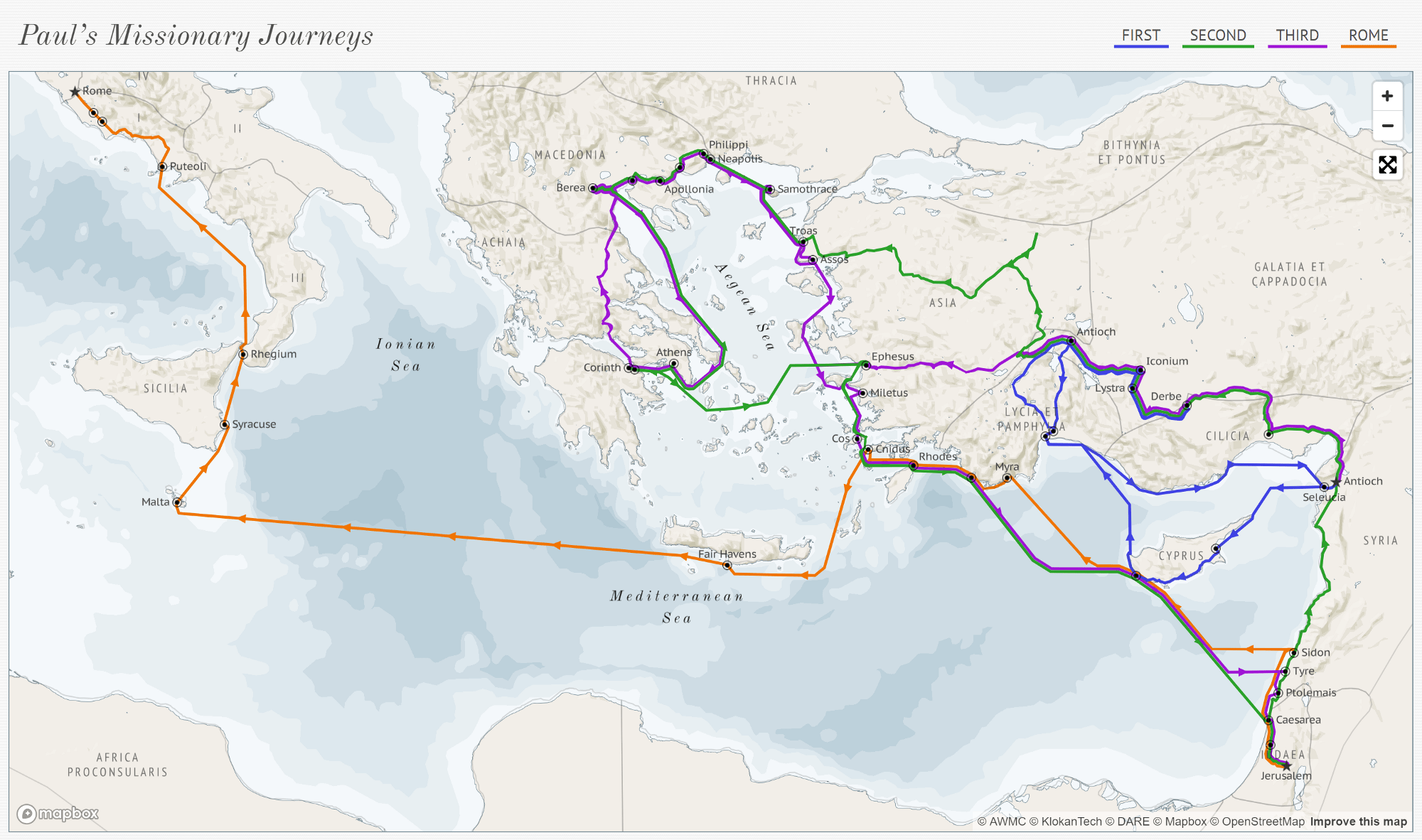 Second perhaps only to Jesus, Paul has had more influence over our Christian story and understanding of God and Jesus than anyone else.  His story is very dramatic and he travels far and wide spreading the Gospel - a life he probably would never have imagined growing up in Tarsus.

Let's hear what Paul has to say and how Jesus changes his life.

Lesson One: The Apostle Paul

Paul lived two thousand years ago.  He was born in a city named Tarsus, and went to school there, he learned to read and write in Greek.  Tarsus was a big city with lots of different kinds of people in it so Paul knew that not everyone was the same. Paul was born with the name Saul.  He and his family were Jewish.  He was very faithful and studied the Jewish Bible.  Every chance he got he went with his family to Jerusalem to celebrate Passover and to see the great Temple.  He learned to skin animals and turn their hides into tents.  He made money by sewing tents of animal skins and cloth.  When he grew up he was so sure that what he had been taught was right that anyone who didn’t agree with his religion was wrong.  Paul thought Jesus was wrong about God.  Paul never met Jesus, but what he heard about him made him mad. Paul chased after people who believed in Jesus to punish them for being wrong.  He was very mean.  One day he was on the road to Damascus – still chasing people who believed in Jesus. Suddenly there was a great light – so bright that it knocked Paul down.  Everyone was afraid.  A voice came out of the light and said, “Paul, Paul, why do you punish me?”   It was the voice of Jesus.  Paul knew his life was changed.  Paul knew it was Jesus calling him. When the light faded, Paul couldn’t see.  He was blind for three days and his friends had to help him get to the next town.  While he was there, a person who believed in what Jesus said came to take care of him.  When Paul opened his eyes three days later, he could see.  Paul knew he needed to learn more about what Jesus said, and taught and believed.  He went into the desert for three years to find teachers and talk to people who knew Jesus.

We call Paul an Apostle – apostle means “someone who is sent.”  Remember we called the people who were with Jesus when he was living disciples – disciple means “follower or student.”   Being an apostle is different – it means going places.  And Paul went lots of places.  Paul traveled about 1400 miles on his first journey.   This is about the same as traveling from Houston, Texas to Washington, D. C.  It would take about two days to drive that far – think about traveling that far if you were walking, or riding a camel, or maybe sometimes in a boat with no motor.  Paul was on the road a lot.  And all the time he was travelling he was finding places to talk to people about Jesus. Every new town he entered he found the marketplace or the synagogue, or the well, or any place people gathered and he started talking.  Paul spread the words of Jesus to many different kinds of people.  People who were Jewish, and people who were not Jewish.   The people who were not Jewish were called Gentiles.  Paul believed the words of Jesus were for everyone – Jews and Gentiles.  This made some of Jesus’s disciples angry – James and John and Peter thought the words were only for people who were Jewish, or would become Jewish – which meant living by Jewish laws and behaviors.  James and John got angry at Paul, and even more angry when it seemed like Peter might be going along with Paul.  They told Peter to stop teaching and preaching to the Gentiles and to leave Paul alone.  Peter did.  He went back to Jerusalem with James and John.  And Paul went out to teach and preach with new friends and helpers.   At first he went mostly by foot or riding a camel.  He went to Antioch and Iconium and Cyprus and Lystra and lots more places.  His new friend Barnabas was with him.  In one city Paul healed a crippled man.  In another he made the people so mad they threw stones at him and ran him out of town.

Being an apostle wasn’t easy.

This journey occurred about 50-52 A.D. with 1½ years based in Corinth.

We call Paul an Apostle – apostle means “someone who is sent.”  Remember we called the people who were with Jesus when he was living disciples – disciple means “follower or student.”

Being an apostle is different – it means going places.  And Paul went lots of places. Paul went many places – on this journey he was led by the Holy Spirit. It was the spirit that told him where to go – and where not to go.  Paul was led by the spirit.

On his second journey he traveled mostly by foot, the Roman Empire had built many good roads so the walking was easier.

Paul walked almost 1000 miles!  Then he went even further than that by boat.  What a long trip! Along the way he visited churches he had helped found in Galatia.  He enjoyed seeing his friends there again, but he had to help stop quarrels they were having about what teachers to listen to.   We think Luke was with him on part of the journey, and Barnabas, and John Mark. He stayed in a city named Corinth for over a year.   Corinth was a seaport and it had lots and lots of people from all over the world passing through.   In Corinth Paul met Priscilla and Aquia – they were tent makers too.  Paul stayed at their house while he was living in Corinth.   When he left Corinth, they ran the church.  They read his letters to the people there.

Paul met a teenage, a believer in Jesus whose name was Timothy.   Even though Timothy was very young Paul told him to be strong in his faith.  Paul considered Timothy an apostle, too.

We call Paul an Apostle – apostle means “someone who is sent.”   Remember we called the people who were with Jesus when he was living disciples – disciple means “follower or student.”  Being an apostle is different – it means going places.  And Paul went lots of places. The Holy Spirit wanted Paul visit Ephesus, so after a time he and Timothy started their journey to this city of Asia. On their way they visited the church in Galatia.

Ephesus was the fourth largest city in the Empire, boasting a population of perhaps 300,000 people.  Paul rented the lecture hall of Tyrannus to preach and teach the gospel.  The fruit of his 2½-year’s in Ephesus was that the entire province of Asia heard the word of the Lord.  Paul's success, however, brought a reduction in traffic; hence the lucrative sale of goddess images by the silversmiths declined. The threat to their commercial interests provoked these merchants to take action, thus causing the riot.  Paul barely escaped from the city and headed up the coast, passing through Troas on the way to Macedonia.  After a period of successful ministry in Macedonia and Achaia, Paul returned to Troas accompanied by at least eight of his associates plus Luke.  At Troas, Paul raised the young Eutychus from the dead when he fell from the upper story of a Roman apartment house called a domus.

The next day Paul walked over 20 miles to Assos, where he met the others on board ship.  Luke went with Paul on the sea journey south through the Aegean Sea until the ship stopped at Miletus, a port city that boasted two harbors. There Paul summoned the Ephesian elders and delivered on the beach one of his most impassioned messages (Acts 20:18-35).

The seas were very rough and Paul was shipwrecked more than once.  On his journey to Jerusalem Paul stopped at one more site in Turkey, the harbor at Patara. Patara became famous later as the birthplace of Nicholas, the patron saint of Christmas.

Paul was an apostle – one who is sent.  Remember he traveled all over to tell people about Jesus.  He traveled by foot, by camel, and by boat.  He traveled thousands of miles and was gone for years at a time.   He really didn’t have a home – he stayed with friends and camped along the way.  Paul stayed as long as was necessary in each town, as he was fairly sure that he would not return again. He knew that he had to go to Jerusalem, and was fairly sure he would die there. So part of the reason for this trip was to say goodbye to some of the people he had come to regard as brothers and sisters in the ever-increasing church around the area. He encouraged the believers, taught them, and helped to sort out some of the difficulties that arose.

He met many people: Lydia, Priscilla and Aquia, Euodia and Synteche, Eutyches, and many more.

But Paul knew his traveling days were coming to an end.   Paul knew he had to go to Jerusalem to visit Peter and James and John.  Paul finally arrived in Jerusalem, and there he was arrested, and had to defend himself before the courts.

He was eventually was sent as a prisoner to Rome, and shipwrecked on the way there.  He almost drowned but survived and was put on another boat to Rome.  In Rome he was arrested again, and while awaiting his trial he wrote several more of the letters that became part of the New Testament.

At last he was freed, claiming his rights as a Roman citizen once more.

But Paul had to stay in Rome, he couldn’t leave.  But he kept on teaching people in the house he was renting and writing letters back to all his friends and ministry partners.

We think Paul was arrested again, tried and found guilty, and beheaded, in around the year 65 AD.