The Road to Jerusalem 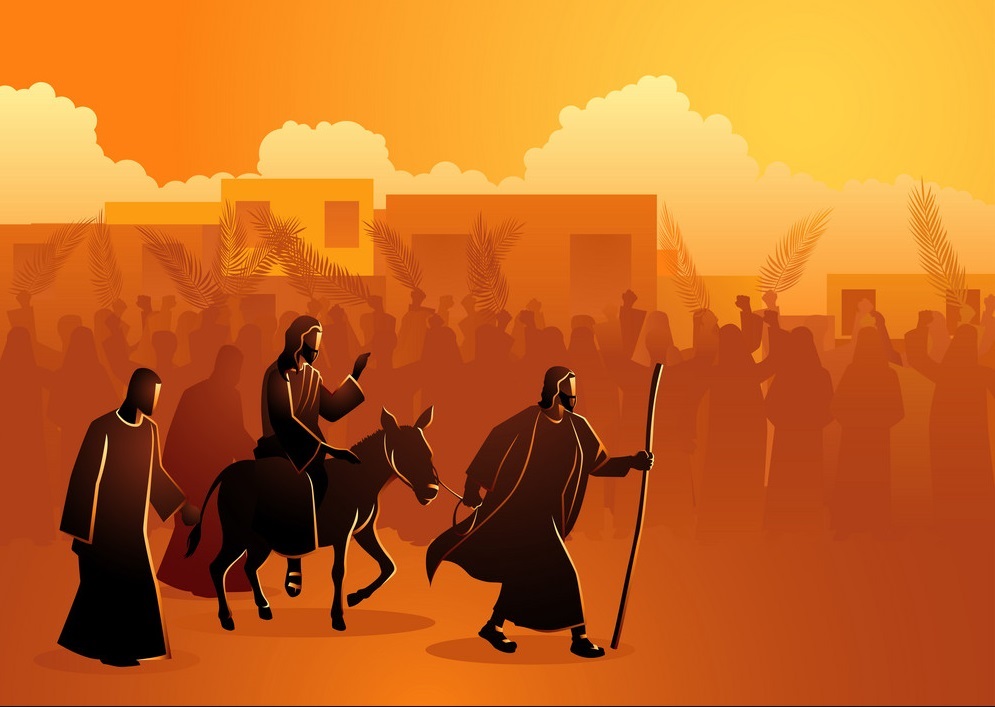 Passover is the most important Jewish religious holiday.  Jesus like many other Jewish people of his day are going to Jerusalem to celebrate in the great Temple.

By now many people have heard of Jesus and want to see him, hear him preach and teach, and ask for his help.

Nicodemus:  One of the people who came to Jesus was a man named Nicodemus. Nicodemus was very smart and very well educated, he was part of the Pharisee class, a group of people who knew and could interpret Jewish law. Nicodemus was not used to being confused about anything.  But Jesus said something to Nicodemus that he just couldn’t understand.  Jesus said that no one could see, much less enter the kingdom of God without being born again.  Born again? How can we who are alive already be born again?  Nicodemus could not understand.  Nicodemus knew the law but he did not know the spirit.  Spirit or law – what does that mean?  What do you think the difference is?  Jesus tells us about the spirit first and the law second. Maybe our next story will help us understand this better.

The Woman at the Well:   Jesus went to a well.  A well was like the community drinking fountain, many people came there to draw water.  Remember in a desert people need water to live, and a well was full of water, it was a gathering place in a town – all went to draw water for their families. Jesus met a woman at this well. This woman belonged to a tribe called Samaritan.  Have any of you heard the parable of the Good Samaritan? Does that give you any ideas about who these people are?  Well in Jesus’s time the Samaritans were not people good Jewish men and woman talked to. By Jewish law they were considered unworthy.  You weren’t supposed to look at them much less talk to them.  Do any of you know someone who is excluded?  Do you ever feel excluded?  Jesus ignored all the rules and spoke to this woman at the well. He told her that while she could give him water for a drink that he could give her living water that would make her life whole and better.  She was so amazed that she went and told all her friends about this amazing person that could change people’s lives. So not only did Jesus talk to this woman – he looked at her, talked with her and took water from the same well.  And helped her know God.

The Woman at the Well coloring sheets

Pictures of The Woman at the Well

The Blind Man:  There was a blind man on the road to Jerusalem.  Because he was blind he couldn’t work, and because he couldn’t work he had no money and no home.  So the blind man sat by the gates of the city of Jericho and begged the people that came and went for pennies, for food, for compassion.  But most people just walked by.  Because when Jesus lived people believed that illness or disability was a sign of sin.  If you were blind you or your parents had sinned.  So no one wanted anything to do with the blind man. But he had heard about a wonderful man that was on the road - Jesus. So he sat by the gates of Jericho lonely and sad. He heard the great sound of feet walking by him, and he heard a different sound in one set of footsteps.  He heard the sound of Jesus’ feet.  Jesus saw the man, really looked at him and said to the others, "he isn't sinful."   Jesus picked up some dirt, spit on it and rubbed the paste against the man's eyes and said, "Now go and wash your face."  And with those few little words he could see.  Because Jesus saw beyond his blindness, the man now could see.

Pictures of the Blind Man

Lazarus:  While Jesus was on the road he found out that a friend of his was very sick.  Jesus had three very good friends: sisters Mary and Martha and their brother Lazarus.  They lived in a town called Bethany, a place not far from Jerusalem on not too much out of the way from Jericho.  But when Jesus heard his friend was sick instead of going to Bethany, he stayed where he was for two days and then walked in the opposite direction. The disciples thought this was pretty strange.  They asked about Lazarus and Jesus said, “he is only sleeping, I’ll wake him when I get there.”   This made the disciples feel a little better.  If Lazarus was just asleep he would probably get well.  But Lazarus died. His sisters cleaned his body, rubbed sweet spices and oil on him, wrapped him in cloth and prepared him for the tomb.  And in the desert you couldn’t just bury someone in the ground, remember the sands are always moving.  So in the desert you found a cave to make a burial place.  Martha and Mary’s friends placed Lazarus in the cave and closed up the door with rocks. When Jesus and the disciples got to Bethany they found out that Lazarus was dead and had been in his tomb for four days.  Martha was so upset with Jesus.  She believed if Jesus had been there Lazarus would not have died. And Mary was also upset and knelt at Jesus’s feet saying that if only he had been there her brother would not have died.  Jesus asked them if they believed he was the one, the messiah. They said “yes, we believe you are the one we have waited for.”  Then Jesus went with them to the tomb.  He looked up in the sky and shouted out, “Father thank you for answering my prayers.”  Then he looked at the tomb.  He had those gathered roll the stone away from the door.  They were worried because they thought the body would stink, but they smelled nothing.  Then Jesus called, “Lazarus, come out!”  And Lazarus walked out of the tomb.  Martha and Mary and everyone else was amazed.

Palm Sunday:  Today we are almost to Jerusalem, almost to our destination.  Today we will reach the gate to the city.  The gate to Jerusalem.  All the people on the road, Jesus among them are almost to the city of the Temple where they will celebrate.  Many of the people in Jerusalem heard that Jesus was on the road and they came out to meet him.  They were shouting “Blessed is the King who comes in the name of the Lord.”  The King - many people thought Jesus was a king that would come and raise an army and defeat all their enemies.  Was Jesus that kind of king ?  Jesus was given a donkey to ride and the people crowded around him as he neared Jerusalem, crying “Hosanna in the highest,” and “Blessed is he who comes in the name of the Lord.”  They put down purple cloaks on the road - purple is the color of kings - and lined the road with palms as welcome to their king, to welcome Jesus.  Jesus enters Jerusalem.  Many people tell him not to, but he enters the city.

How to fold a Palm Cross

Easter Sunday:  When the Sabbath is over and the morning light comes faithful women go to the tomb where Jesus lays to properly bury his body. Mary who was his mother, and Mary his dear friend, and Mary Magdalene who was his beloved come to the tomb. But they find it empty.  Instead of a body they find an angel.  The angel tells them something unbelievable – to not be sad, that Jesus is not here dead but that he has been called into new life. Two of the Mary’s run off to share this great news with the other friends of Jesus. But Mary Magdalene who was his beloved stayed behind. And it was to her that this new life Jesus first appeared. And he told her to not be afraid, that he was indeed living a new life, one that she would someday be called to.  Jesus was called by God to live through death, not like Lazarus who was called out of death into life, Jesus was called into a new life.  And Jesus and God share this call and gift with us. We are all Mary at the tomb and have this wonderful invitation from Jesus to live a new life, to be changed by what we see and hear and learn.  We are an Easter people so a story that can sound very sad is instead full of life and hope and the sure knowledge that God is with us, that we are the body of Christ full of hope and goodness.