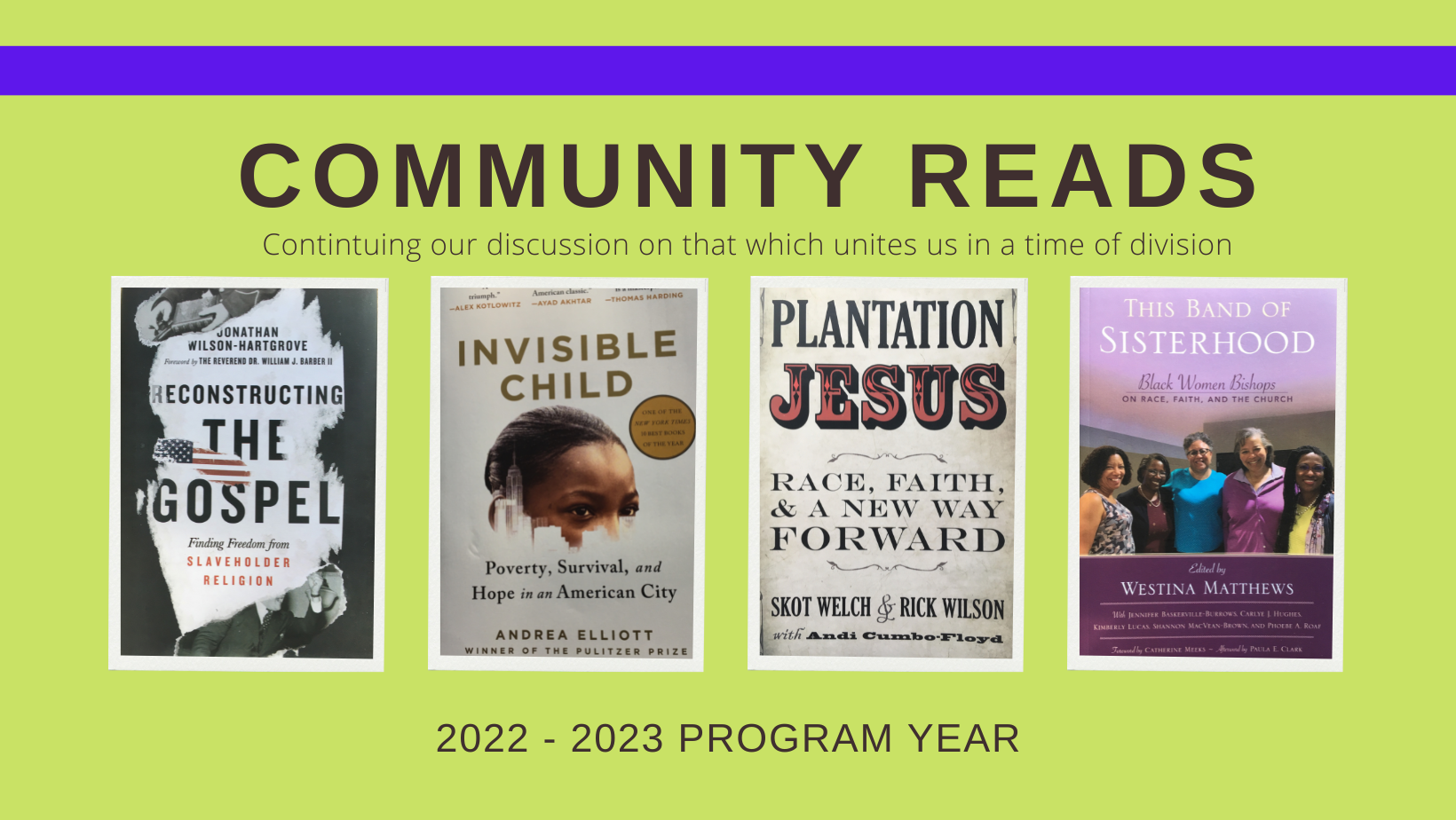 Community, that which unites us, our common union one with another.  Fellowship has been defined as fellows in the same ship.  One thing that we lack in our understanding of ourselves and our churches is the ability to see our common union.  Our understanding of church has been impacted due to our need to stay socially distanced.  Perhaps the walls that separate us have been exposed for the farce that they are since we can now log on and be church -- or can we?

As a result of prayer and in consideration of our social realities, we will begin a series of book studies with St. Peter's in the Richmond area.  The intent of these gathering is to examine where we as church have been, where we are, and where we hope to go into the future.

As a prelim to our study please give yourself a few minutes to listen to Nigerian author Chimamanda Ngozi Adiche's TED Talk on the danger of having only one story about a people, a culture, a nation, a country.  Her novels, Americanah and Purple Hibiscus are good reads.

And maybe pray this prayer:

Lord forgive us - forgive our failings born of the stories we've been told and embraced.  Help us as we grapple with our lack of understanding, our new hearing and honoring each other's stories.  Help us in our going forward to hear and honor our shared and disparate experiences knowing that it is only in honest and safe spaces that we can begin to really hear one another and listen without attempts to fix or correct.  We are in this to grow by listening and honoring.  We are in this to honor each other.

Tuesdays evenings from 7-8pm via Zoom

Please consider joining us as we read through the Program Year of 2022 through 2023 season: 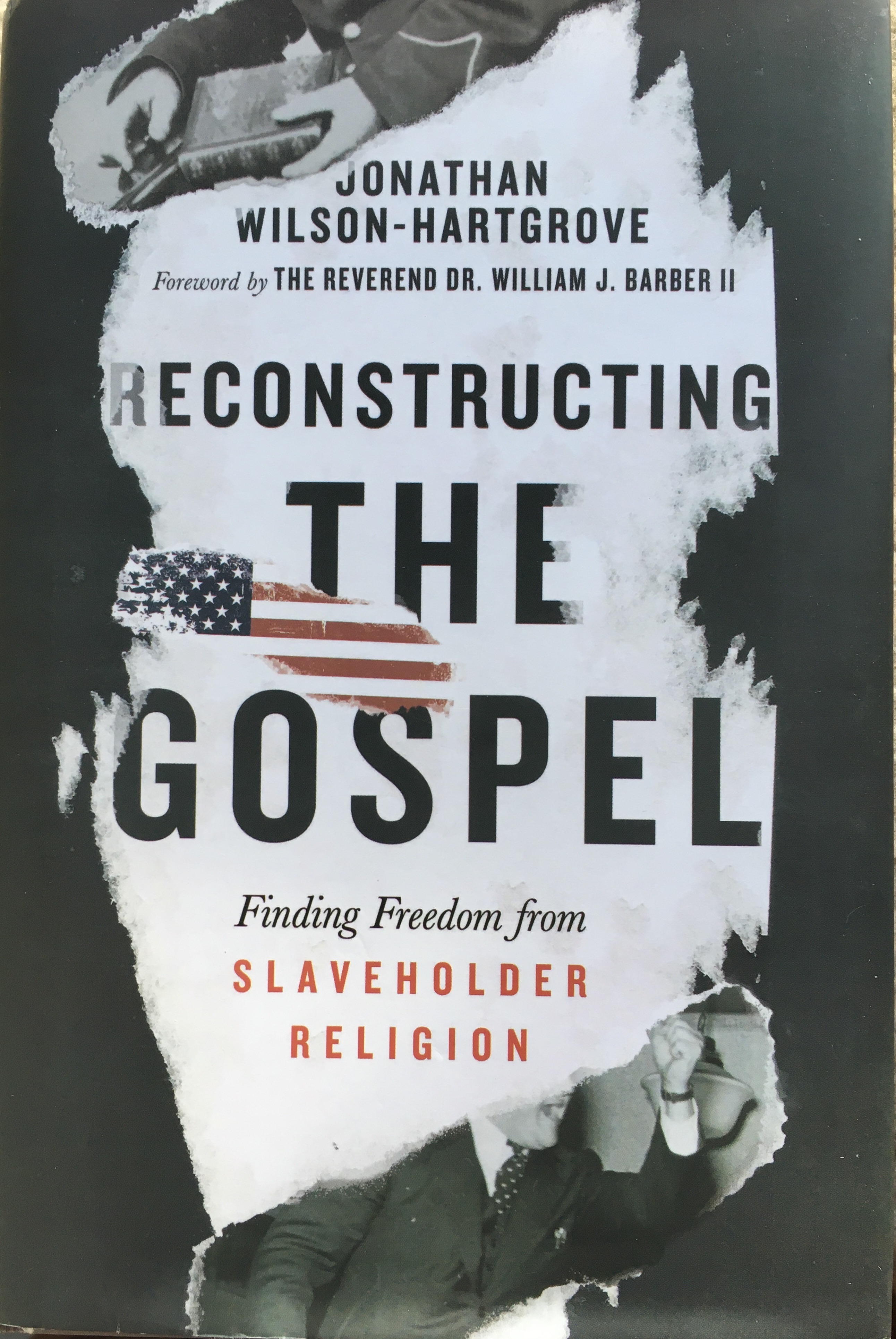 Book One:  Reconstructing the Gospel: Finding Freedom from Slaveholder Religion, by Jonathan Wilson-Hartgrove

"I am a man torn in two. And the gospel I inherited is divided."

Jonathan Wilson-Hartgrove grew up in the Bible Belt in the American South as a faithful church-going Christian. But he gradually came to realize that the gospel his Christianity proclaimed was not good news for everybody. The same Christianity that sang, "Amazing grace, how sweet the sound" also perpetuated racial injustice and white supremacy in the name of Jesus. His Christianity, he discovered, was the religion of the slaveholder.

Just as Reconstruction after the Civil War worked to repair a desperately broken society, our compromised Christianity requires a spiritual reconstruction that undoes the injustices of the past. Wilson-Hartgrove traces his journey from the religion of the slaveholder to the Christianity of Christ. Reconstructing the gospel requires facing the pain of the past and present, from racial blindness to systemic abuses of power. Grappling seriously with troubling history and theology, Wilson-Hartgrove recovers the subversiveness of the gospel that sustained the church through centuries of slavery and oppression, from the civil rights era to the Black Lives Matter movement and beyond.

When the gospel is reconstructed, freedom rings both for individuals and for society as a whole. Discover how Jesus continues to save us from ourselves and each other, to repair the breach and heal our land. 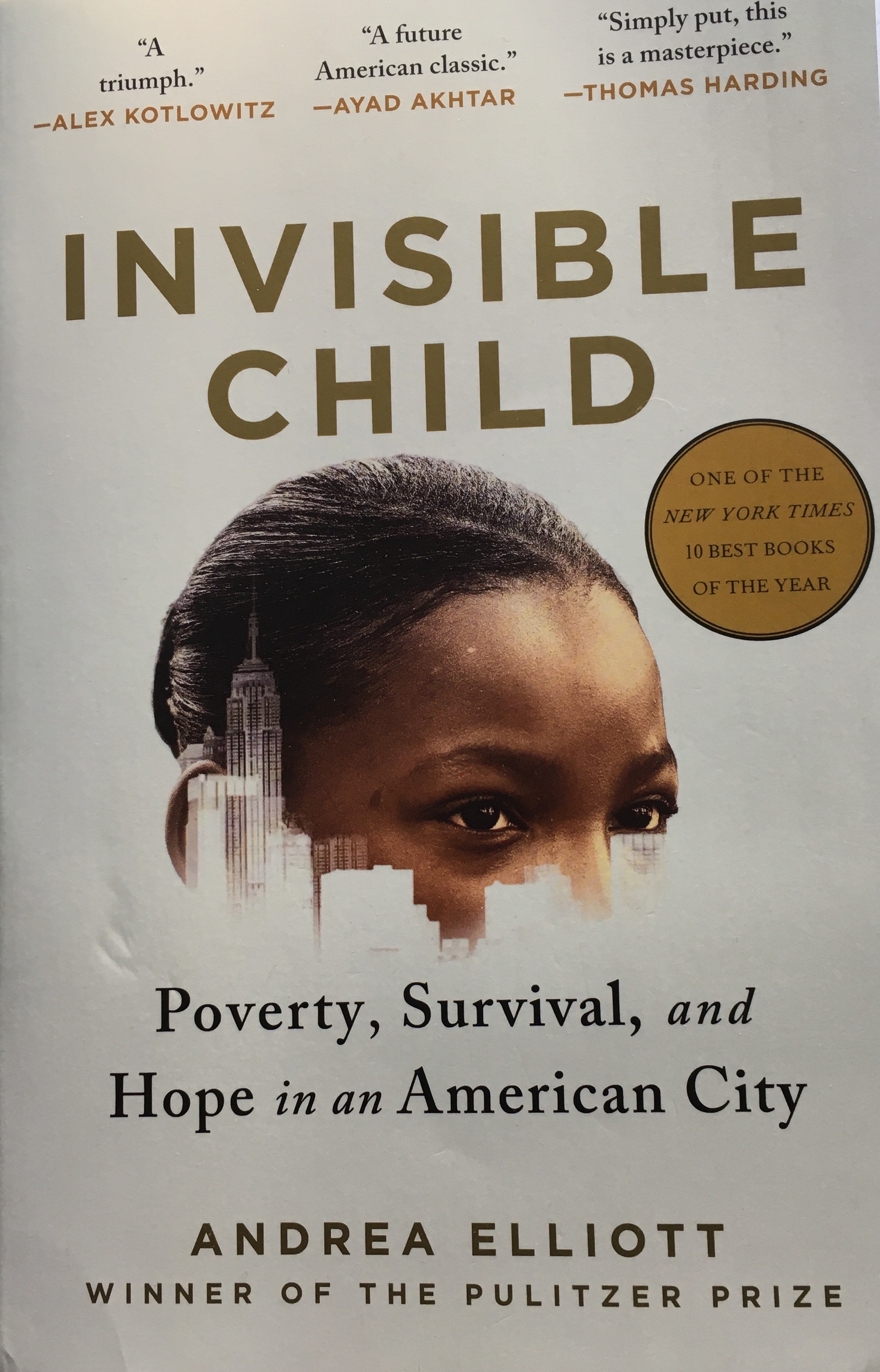 In Invisible Child, Pulitzer Prize winner Andrea Elliott follows eight dramatic years in the life of Dasani, a girl whose imagination is as soaring as the skyscrapers near her Brooklyn shelter. In this sweeping narrative, Elliott weaves the story of Dasani’s childhood with the history of her ancestors, tracing their passage from slavery to the Great Migration north. As Dasani comes of age, New York City’s homeless crisis has exploded, deepening the chasm between rich and poor. She must guide her siblings through a world riddled by hunger, violence, racism, drug addiction, and the threat of foster care. Out on the street, Dasani becomes a fierce fighter “to protect those who I love.” When she finally escapes city life to enroll in a boarding school, she faces an impossible question: What if leaving poverty means abandoning your family, and yourself?

A work of luminous and riveting prose, Elliott’s Invisible Child reads like a page-turning novel. It is an astonishing story about the power of resilience, the importance of family and the cost of inequality—told through the crucible of one remarkable girl.

Listen to this October 2013 Brian Lehrer interview with Andrea Elliott: Profiling a "Girl in the Shadows" (45 minutes)

For January 24 think about:

This is an interesting 2022 interview with Andrea Elliott and Hari Sreenivasan from Amanpour & Co.
https://www.pbs.org/wnet/amanpour-and-company/video/invisible-child-the-life-of-a-homeless-family-in-nyc
For January 31 think about:
Read: When Dasani Left Home https://www.nytimes.com/2021/09/28/magazine/dasani-invisible-child.html?smid=em-share
For February 7 think about:

And if you have time:  I think both are challenging reads

Poverty and homelessness in the details: Dasani and what came after 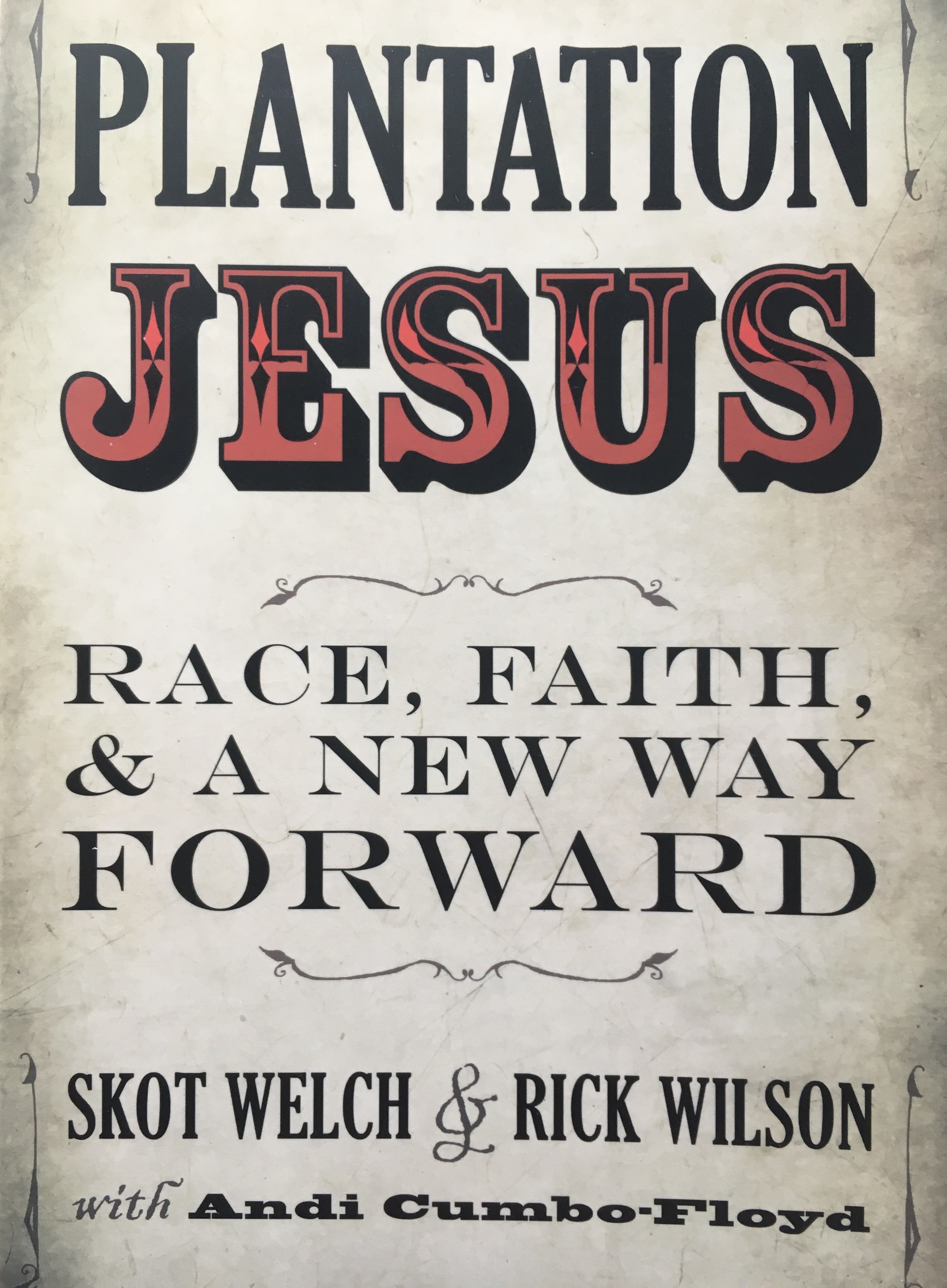 Not long ago, most White American Christians believed that Jesus blessed slavery. God wasn't bothered by Jim Crow. Baby Jesus had white skin. Meet Plantation Jesus: a god who is comfortable with bigotry and an idol that distorts the message of the real Savior.

That false image of God is dead, right? Wrong, argue the authors of Plantation Jesus, an authoritative new book on one of the most urgent issues of our day.

Through their shared passion for Jesus Christ and with an unblinking look at history, church, and pop culture, authors Skot Welch and Rick Wilson detail the manifold ways that racism damages the church's witness. Together Welch and Wilson take on common responses by White Christians to racial injustice, such as I never owned a slave; I don't see color, only people; and we just need to get over it and move on. Together they call out the church's denials and dodges and evasions of race, and they invite listeners to encounter the Christ of the disenfranchised.

Book Four:  This Band of Sisterhood: Black Women Bishops On Race, Faith and the Church, Edited by Westina Matthews. 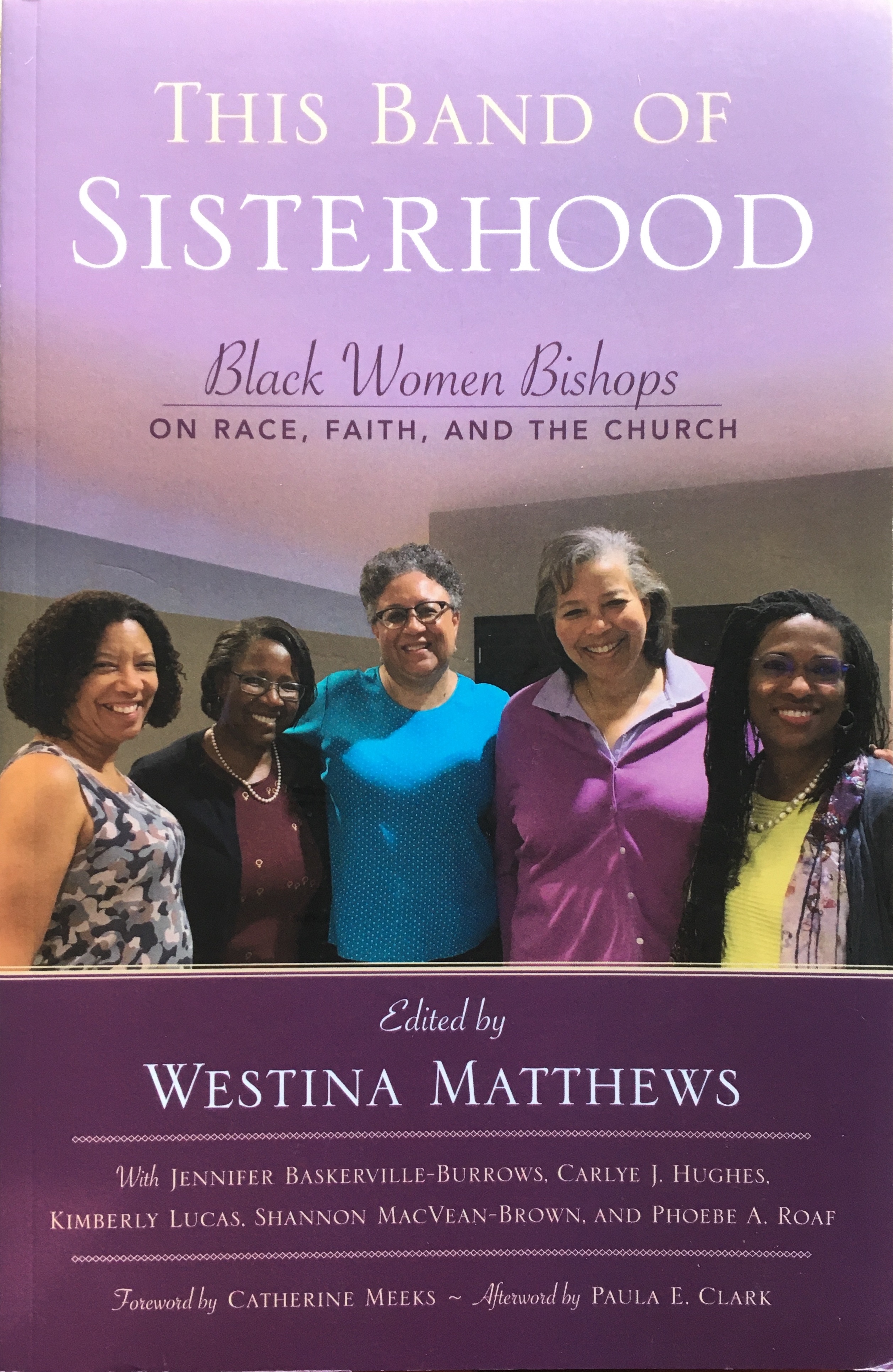 Get to know the first five Black women to be elected diocesan bishops within the Episcopal Church.

During this moment, with the #metoo movement, Black Lives Matter, and the increased feelings of division in our country, Black women clergy in the Episcopal Church have voiced a need to come together, believing that their experiences and concerns may be very different than those of other clergy. That need is answered here in This Band of Sisterhood.

The five Black women bishops featured in this book can provide a compass for how to journey along these new paths. Jennifer Baskerville-Burrows, Carlye J. Hughes, Kimberly Lucas, Shannon MacVean-Brown, and Phoebe A. Roaf offer honest, vulnerable wisdom from their own lives that speaks to this time in American life.

Both women and men will find this book invaluable in discerning how God might be calling them to use their own leadership skills.

Better Not Bitter: Living on Purpose in the Pursuit of Racial Justice, by Yusef Salaam